This article describes a on-going research project that blurs the frontiers between dominant and marginal cultures, their social practices, visual symbologies, and aesthetic manifestations, in the unstable space of the city, by discovering, collecting and preserving graffiti and street art works in middle range cities of Northern Portugal. Using the conceptual tools of intercultural studies, StreetArtCEI awakens tourist and inhabitants alike to the symbolic power of self- and hetero-marginalized aesthetical stances, organized by routes that reflect the social-cultural geography of the city. The methodology of the project includes the collection and study of both illegal art works in marginal sites; and of art works ratified and commissioned by private and public institutions, in tourist spots and high-end streets. The article analyses critically the feedback obtained from local authorities, the media and the community, and proposes several topics for further consideration.

StreetartCEI thrives inside of a paradox built by itself, as a public institution led project that, at same time, collects, preserves and legitimizes cultural products which damage public and private property. We highlight the media’s interest for the economic potential of the project, as well as for the aesthetic appeal of the writers’ techniques, readily transformed into recognized canonical authors. Concerning the reception by local powers, we emphasise their swift investment in the creation of tailor-made local routes of graffiti and street art, that is, in artworks whose deletion those authorities are sponsoring at the same time. This apparent paradox by local institutions reproduces the common need for domestication of irreverence and commodification of the illegal, a paradox that all intervenient actors are aware of. StreetArtCEI’s intercultural action takes place in a borderzone between the legal and the illegal, where researchers play the role of mediating agents, creating new discursive fields in permanent intersection. 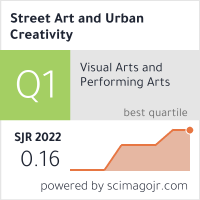